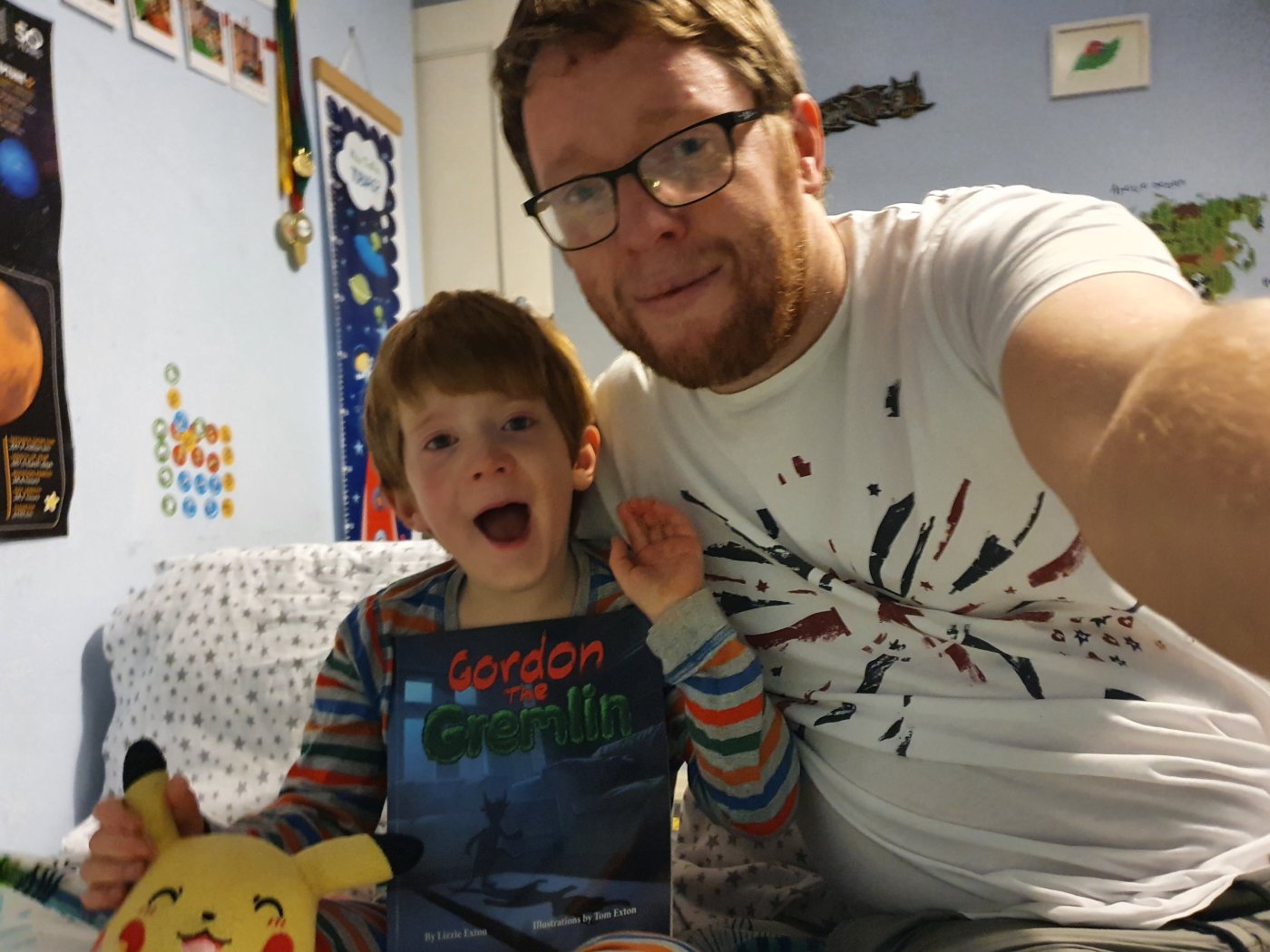 We had a second picture book for the week tonight as it was our stop on the #blogtour for a book released into the world just yesterday – Gordon the Gremlin by brother and sister duo Lizzie Exton and Tom Exton.

Gordon is the naughtiest of gremlins and causes all manner of mess and disaster in the house by the park. When he isn’t leaving lids off jars or hiding keys you’ll find him sat contentedly tangling wires! What a sod! But one day, he wakes to find the house empty and his humans gone. An initial celebration at having driven them away turns quickly to despair when Gordon realises he is all alone and suddenly afraid of the dark. He makes a solemn promise to behave if his humans ever return, but will he keep this promise when a new family move into the house, or will the opportunity to misbehave prove to tempting to resist?!

Of you are looking for a new read for Halloween, this is bang on the money. The dark atmospheric illustrations have clearly taken their inspiration from horror movies and Gordon makes for a likeable anti-hero – a good balance of cute enough to charm but also with a naughty streak. The story is quite long for a pb but the rhyme works nicely and helps keep things moving forward. The ending is a brave one for the market and it certainly caught T by surprise! I’ll leave it to you to go find out why!

INTERVIEW WITH LIZZIE AND TOM!

We were really lucky to be offered the opportunity to ask Lizzie and Tom a few questions about their experiences bringing Gordon to life, and they took the time to give us some really thoughtful answers. Have a read below for some fantastic insights into publishing, some inspiration for adults and children and lots of laughs too…

How does it feel having a debut picture book flying free? Can you both tell us a little bit about your journey to this point?

L:  It’s absolutely amazing, and a little surreal!  We worked on the book for about a year and we were over the moon when it was picked up by Tiny Tree.  It feels like Christmas has come early, seeing it finally out there.

T: I echo that, amazing and surreal at the same time.  I can’t wait to see it on the shelves of my local bookshop.  Sadly our initial publication date had to be pushed back due to Covid, but in a lot of ways it worked out for the best.  Gordon’s being unleashed in time for Halloween, his favourite time of year!

Where/how was the idea for Gordon born?

L:  Credit where it’s due, the idea was our dad’s initially.  When we were little, he always blamed Gordon the gremlin for anything which went wrong around the house – keys going missing, wires getting tangled together, odd socks.

T: ‘Gordon’s been at it again’ was just a commonly used phrase in the Exton household.  It would have been nice if our parents had really believed Gordon caused all the mischief, just think of all the naughty stuff we could have got away with!  He just seemed like the right choice for an anti-hero because you can have so much fun with a character who loves mischief.

Why did you decide on telling the story through rhyme? Did this happen by accident or is it something you worked on?

L:  It was definitely something I worked on, it was a very deliberate choice.  A lot of the books we loved as children were written in rhyme, and I think children find it easy to memorise poetry.  I wanted the rhyme and rhythm to be quite tight, so hopefully children will naturally learn sections of it by heart.

There is clearly a healthy dose of horror movie inspiration in the illustrations. Where exactly did your inspiration for Gordon and the dark settings come from?

T:  We’ve both been life-long fans of horror films, and scary films were always our favourites when we were little.  Now I’m an adult I love Hammer Horror, but one of our go-to movies as kids was the adaptation of Roald Dahl’s The Witches.  That’s pretty scary.  We were also major Tim Burton fans.  I think we gravitated towards any books, films or video games which featured a haunted house, so I guess with Gordon we were just recapturing that childhood fascination.

I think your ending is a brave one. Why did you allow Gordon to stay true to his naughty/cheeky self rather than have him learn a ‘lesson’ and ‘come good’?

L:  I know this sounds like a cliché, but I suppose we wanted to give kids the message that they should just be who they are.  We are all naughty as children and that’s fine, it’s part of growing up.

T:  I’d say the same, it’s a case of ‘just be yourself’.  Don’t let events change you.  Gordon doesn’t learn his lesson but there are plenty of life lessons we’ve not learnt!

Will we be seeing more of Gordon in the future? What other projects have you both got on their way?

T: Actually, we’re currently working on a follow-up which is set at Christmas.  We’re not going to give away any plot spoilers, but just imagine the fun Gordon could have during the festive season!

L:  The script is more or less there, with a little more polishing.  It’s just a case of working out layouts and getting the illustrations done.

What have been the easiest and hardest parts of the journey to publication for you both?

L:  For me, the easiest part was at the beginning, when we were just bouncing ideas around and having fun creating the plot and character.  The hardest part was approaching publishers.  Tiny Tree saying yes was such a special moment.

T: I think for me I’d say the same, as to the easiest part.  It was fun creating character designs.  The hardest part was mid-way through the illustrations.  You’ve done so much but it still feels like there’s so much to go.  It was pretty time-consuming!

I like playing and drawing with my little brother. Was it fun working together or did you do lots of fighting?

L:  It was fun!  I think siblings are very in tune with each other, we always seemed to be thinking the same thoughts and enjoying each other’s ideas.  Even when we were little, we hardly ever argued.  We’re still best friends, so working together didn’t feel like work.

T:  Same.  It was just a really fun experience.  I don’t think we can bounce silly ideas off anyone else the way we can as brother and sister.  We had very few disagreements about which direction to take the book in, we agreed on more or less everything.

Have you always liked reading and drawing?

L:  I have always loved reading.  I would read anything and everything when I was little.  When I was ten I vowed to read every book on the bookcase in my classroom, and I managed it!

T:  I was drawing from the moment I could hold a pencil.  I started out with stick men and used to fill pages and pages with them – the more you do it, the better you get.

What is your favourite children’s book? Why?

L:  For me it has to be a book called The Park in the Dark.  It was about some toys who went on an adventure to the park in the middle of the night.  It was written in rhyme, and my parents read it to me so often I could recite the whole thing.  I also loved The Monster Bed and Not Now Bernard.

T:  She beat me to it!  The Park in the Dark was my favourite too – I think we always wanted to sneak out the house in the middle of the night to go to the park down the road.  It was always a bit too scary.  Burglar Bill and the The Minpins were also up there.

Do you think it is ok to be naughty sometimes?

T: Absolutely, but don’t tell your dad that!  I did some very naughty things when I was little.  I once drew silly faces on the brand-new wallpaper – our parents weren’t happy…

L:  I agree, being naughty can be a good thing.  Everybody is naughty now and then, even the grown-ups who do the telling off.  If you weren’t naughty once in a while, life would be very boring.

What do you think might happen if Gordon came to my school?

L:  I think he would have a great time!  Can you imagine all the mischief he would get up to?  He would be hiding the teacher’s things, pinching food from lunchboxes – all sorts of mischief.

T:  Oh wow, it would be chaos!  He would have the best time of his life.  I can picture it now – I think you might have just come up with the plot for a future book!

My dad said Gordon is an old man’s name? How come you called your gremlin Gordon?

L:  It is quite an old-fashioned name now, but it was our Dad who came up with it when we were little.  There’s just something really nice about the way it trips off the tongue, and it’s quite funny.

T:  You know, I don’t think I’ve ever met a ‘Gordon’ in real life.  It seemed like a good name for a gremlin – it’s unusual these days, so it stands out too.

Can you tell me and my friends why you think reading and art are fun and important?

L:  That’s a great question!  I think reading is incredibly important, and I’m so glad you’re a reader too.  I can’t imagine a life without books.  Reading makes you think about things, and it’s fun because it means you can experience stuff you might not get to experience in real life.

T: I reckon art is important for all sorts of reasons.  It lets you either capture real life or completely invent your own little world.  I’ve always wanted to be an artist and there’s something really relaxing about just doodling in a notebook.  Even people who don’t think they’re artistic should give it a go.